The World Chocolate Masters pt.1; What is it, and why am I doing it? 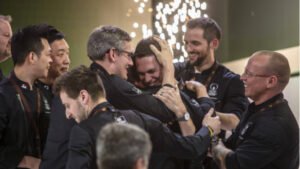 The most significant difference between the two is that the Coupe du Monde is a team effort consisting of 3 pastry chefs and 1 coach. In contrast, the World Chocolate Masters is a solo endeavour.

At the Coupe du monde the chefs are also required to create a sculpture made out of pulled and blown sugar, whereas, as the name suggests, at the World Chocolate Masters it’s all about chocolate.

To qualify for the World Chocolate Masters, one must apply to enter the regional heats, in my case the UK and Ireland heat which will be held in Banbury in May 2021. Only the 6 applicants who are deemed the strongest by the judges are invited to compete at the regional rounds. Over 20 countries are represented at the finals in Paris, yet, so far, Ireland has never been one of them, that is something I want to change. Not only for myself but also to inspire the next generation.

This edition, we are tasked to come up with our vision of the future of chocolate which we will have to showcase through the creation of sculpture, a chocolate bonbon, a patisserie of the day and a ‘snack on the go’ (Find out more about the com 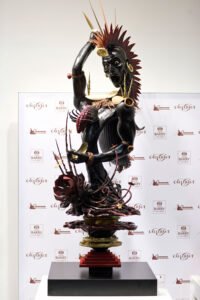 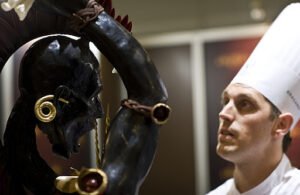 It is hard to believe it was already 9 years ago.  Still, in 2011 I was invited by a Belgian equipment manufacturer to join them to Paris in support of the Belgian entry. (At the time I still lived in Belgium).

I remember walking around the competition area, where the chocolate sculptures where displayed and being almost at a disbelief of how this was possible with chocolate, “how does one get so good? Can I get this good?” I remember thinking.

Since then, I have visited every final in Paris except for one.

While our education in Belgium gave us a fantastic foundation in a broad sense, making some simple sculptures along the way, it was nothing like what I saw in Paris. This was a completely different level.

I knew then and there that I wanted to reach such levels, although I had not a clue on how to embark on this journey. As a student, I was never the high achiever in class as I struggled with a crippling fear of failure and tended to shy away, from challenges like that. Thus my teachers had never pushed me to enter competitions.

9 years ago I was only 24, While there have been winners at that age, they are the exception and not the norm, I had time on my side, and I embarked on a journey to upskill bit by bit.

When I was 25, I moved to London to work at the Café Royal Hotel in London, as the chocolatier for the hotel. You could say my journey started there, as that is really where I began to perfect my chocolate skills. The experience I built up there got me noticed by a Saudi start-up chocolate company. Working in Saudi came with a financial reward, and now I was able to start investing in myself with courses on pastry, chocolates and sculptures.

First, I went to my biggest hero in the chocolate world: Stephane Leroux, who probably creates the most aesthetically pleasing chocolate showpieces on the planet. This was to build up my base understanding of what makes a beautiful showpiece. I would follow that up with a training course with Martin Chiffers in Banbury: The UK’s most prolific and experienced chocolate showpiece specialist and coach; A class with the American pastry team at the Valrhona academy in Brooklyn; A course with Lawrence Bobo, one of Malaysia‘s chocolate showpiece experts and one of the best in the world in my opinion, and finally one with Frank Haasnoot, the winner of that 2011 World Chocolate Masters that triggered it all.

Helping out the UK candidate in 2018

In 2018 I helped out Barry Johnson, the UK entrant for the finals and flew to the UK on several occasions to assist in any way I could. I ended up getting tasked with driving him with a small truck full of chocolate bits from London to Paris on about 2hrs of sleep (No pressure, Erik!). The days leading up to the competition were some of the most stressful ones of my life! (and I was not even competing!) Somehow it made me want to do it even more! 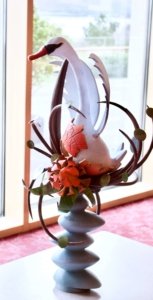 In the past few years, I have been making showpieces just for fun at every opportunity that presented itself. While I usually was quite constrained by time, I could spend on them, I made sure to try at least one new technique every time.

Here you see one of those opportunities: the swan I created for the Europe hotel in Killarney during Easter in 2019.

There is obviously more to it than just creating showpieces, and competitions have been lost by chefs who focused too hard on the showpiece and neglected the other elements. However, I believe it’s especially in the showpieces area that I had to overcome a lack of raw genetic talent by taking on as many classes as I could with people who are much more gifted at it. Whereas I believe my talent lies in the pairing of flavours.

Why I’m doing it

So why am I doing it? Because the World Chocolate Masters represents the pinnacle in the world of chocolate, and I want to earn my spot there. While increasing awareness for the competition and encouraging others in Ireland to go for it as well.

Ireland has been underrepresented at high-level international culinary competitions even though we have some of the best chefs in the business. I want to lead by example, and I hope this can lead to more. I would love to see an Irish team go to the Coupe du Monde as well in the coming years, and I would want to be part of that journey too. 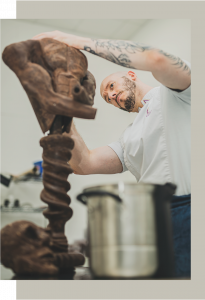 It’s also a creative outlet, while I’m extremely proud and happy with the creations I sell, I am bound by financial realities, such as ingredient and labour costs. I often feel like I have to hold back my creativity in order to keep things both producible and cost-sensible. Here, I will be able to push the boundaries without these limitations.

While I will be the one in the spotlight on the day of the competition and I will be there alone, I must stress it will be a team effort from a preparation side. This project is too big for one person alone to take on alongside the daily requirements of running a business. I have been assembling a team of younger pastry chefs around me to assist me during my brainstorming & practice sessions. They assist me with the realities of preparing for such a competition: from weighing up ingredients to bringing a set of fresh eyes and taste buds to the creations.

About the Author: erik

Dear customer, we are currently closed as we are moving from our small production kitchen, to our first brick and mortar factory shop in Dublin 2. We have run into delays and are not taking orders at the moment with no clear view yet on when we can open again. Dismiss